The discovery of our personal identity

Personal identity creation is an essential element of the human race. The literal construction of our identity, involves the relationships and connections that we make.  The life experiences we become involved in are the factors which ultimately put a stamp on us as individuals. The construction of our personal identity is usually expressed as a conceptual visual representation of our individual thoughts and emotions.

Our individual identity is built from a variety of linkages, such as our race, culture, sexuality, gender, age and class. Marjo Räsänen developed an interpretation of this with what she calls ‘The factors affecting cultural identity’. She illustrates this phenomenon in the form of a flower, in which the petals symbolize “micro cultures”. These petals represent eight factors, namely, ethnicity, geography, religion, age, gender, language, class and ability.

Within the flower of multicultural identity, an individual is viewed as a member of numerous reference groups. Each individual belongs to a certain “macro culture”. These cultures consists of institutions, laws, national identity, etc. They are then then broken down into the various petals of their micro cultures. One’s cultural identity is forever changing as these petals constantly become renewed; religion and geography however are viewed as the stable parts of one’s culture, as these rarely change. 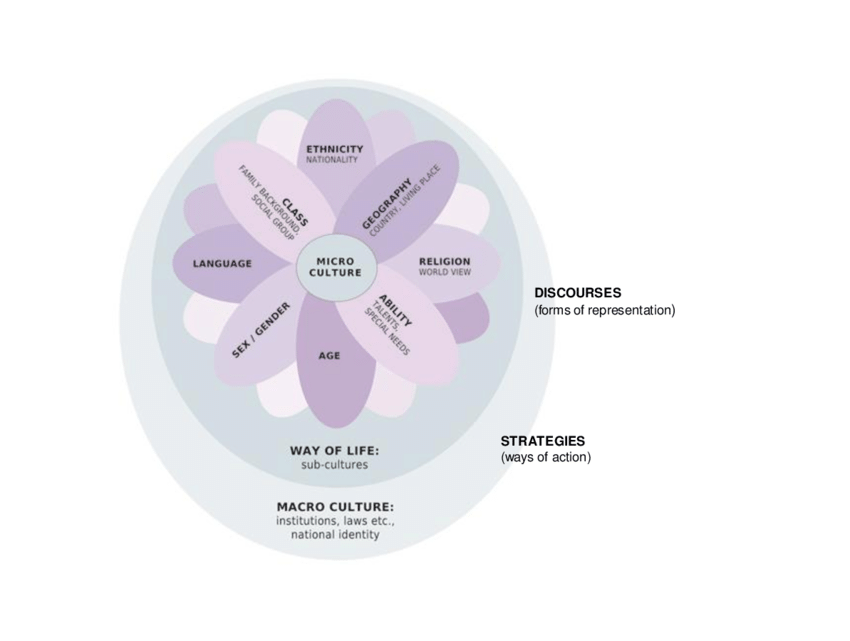 Cultural identity is constructed on spoken, creative and other stories shaped in a certain period and context. The rituals an individual takes part in, the clothing he or she wears and the images that said individual creates, form part of a tradition that will ultimately link him or her to a group. However, an artwork only becomes a cultural piece once it has been shared and reflected upon. Arts contribute to the creation and reconstruction of culture.

Many art theories relating to postmodernism emphasize on personal identity construction. Postmodern theorists suggest that art offers doors to a variety of worldly truths, based on the perspective of the viewer. Art as a cultural platform, builds a bridge of cultural transfer between the maker and the viewer.